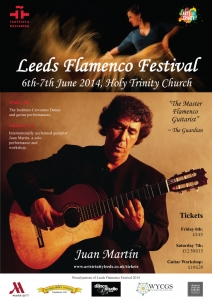 We are very excited to announce the details of this year’s Leeds Flamenco Festival, held at the Holy Trinity Church, featuring a headline performance from internationally renowned guitarist Juan Martín. Having played with such luminaries as Miles Davis, Herbie Hancock, and Rory Gallagher, Martín is a player at the top of his game, and was voted one of the top three guitarists in the world by Guitar Player magazine. Martín’s concert on Saturday 7th is a rare opportunity to see a world class player in an intimate setting. In addition to his concert, Martín will be running a workshop from 11am to 1pm – book now to avoid disappointment!

The festival runs from Friday 6th to Saturday 7th June 2014, and features performances and workshops of both flamenco guitar playing and flamenco dancing. The opening event is a showcase of students and tutors from the Instituto Cervantes, the international ambassador of Spanish language and culture. This event will also a feature a solo performance from Samuel Moore, whose award winning tutor book is available in the Leeds shop.